Clinpharmpod  is the clinical pharmacology podcast from the journal Clinical Pharmacology and Therapeutics produced in association with Nature Publishing Group. In the March 25th episode from Clinpharmpod, host Geoff Marsh interviews Dr. Mary Relling on the history and future plans for the Clinical Pharmacogenetics Implementation Consortium (CPIC). A joint effort between the Pharmacogenomics Research Network (PGRN) and PharmGKB, CPIC was established in 2009 to develop gene-drug dosing guidelines that enable the translation of genetic test results into actionable prescribing decisions. Dr. Relling addressed many questions regarding the origin of CPIC, the roles of CPIC members, how CPIC guidelines differ from other clinical guidelines,  how gene/drug pairs are chosen and prioritized, the format and essential components of CPIC guidelines, and the future directions for CPIC.


PharmGKB has been intimately involved in the CPIC development from the very beginning. To date, twelve CPIC gene/drug guidelines have been published in journal Clinical Pharmacology and Therapeutics and a few more in the plan. All CPIC guidelines and updates are posted and maintained on PharmGKB in an interactive format. An article describing the CPIC guideline development process was also published recently in journal Current Drug Metabolism.

Email ThisBlogThis!Share to TwitterShare to FacebookShare to Pinterest
Labels: cpic

However, the results of genetic association studies, including genome wide association studies (GWAS), are often difficult to reproduce as evidenced in pharmacogenomics. The authors provide multiple reasons why false positives and false negatives in genetic association studies prevent results from being reproduced. Much of the data in pharmacogenomic studies come from groups of patients who may have differing drug regimens and intervention strategies. Other factors include low minor allele frequencies, small effect size of the variants, limited sample sizes, and differences in phenotype definitions.

The authors conclude that as an alternative to replication a combination of methods should be used to validate results. They’ve termed this multi-method validation of genetic association studies “triangulation”. They propose to validate results through a combination of functional validation in vitro and in animal models, joint analyses of several populations, and simulation-based methods, and cite a precedent for methodological triangulation in the social sciences. Social science research involves highly complex systems, and the inherent ethical limitations in human subjects research render reproducibility an impractical method of validation.

In a response, Dr. Aslibekyan and colleagues agreed with much of Dr. Ioannidis’ argument. They did, however, reiterate the concern that lowering P-value thresholds for single nucleotide variants could cause many single gene variants with true associations to be overlooked due to factors such as gene-environment interactions and epistasis.

To Replicate or Not to Replicate: the Case of Pharmacogenetic Studies: Establishing Validity of Pharmacogenomic Findings: From Replication to Triangulation. Circulation: Cardiovascular Genetics (2013)

To Replicate or Not to Replicate: the Case of Pharmacogenetic Studies: Have Pharmacogenomics Failed, or Do They Just Need Larger-Scale Evidence and More Replication? Circulation: Cardiovascular Genetics (2013)

PharmGKB Unaffected by the Heartbleed Bug

The "Heartbleed Bug" has been in the news a lot lately, and for good reason. It's a security vulnerability in some versions of OpenSSL that allows the theft of information that is protected, under normal conditions, by the SSL/TLS encryption used to secure the Internet. It's estimated that this has impacted about 30% of all websites. That's a lot of websites.

The good news for PharmGKB users is that our services were not affected by the bug. You do not have to change your password on PharmGKB.

If you're looking for a simple explanation of the problem, xkcd has the most concise one I've seen to date:

We have published the
PharmGKB summary: very important pharmacogene information for SLC22A1 in the Pharmacogenetics and Genomics Journal.

Find out more...
View our SLC22A1 VIP on PharmGKB.

View all VIPs on PharmGKB.
Posted by Li Gong, Curator at 12:38 AM

PharmGKB is happy to announce that they were the recipients of the Best Poster award at the International Society for Biocuration conference in Toronto this week! 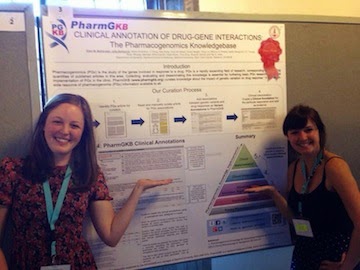 Email ThisBlogThis!Share to TwitterShare to FacebookShare to Pinterest
Labels: conference

Russ Altman presented the Year In Review yesterday at the AMIA Summit on Translational Bioinformatics 2014 in San Francisco.

Dr. Altman's year in review is meant as an overview for trends and publications for the previous year and to speculate about what opportunities might lie in the year ahead. He presented 32 publications (and 10 "shout outs") focused on translational bioinformatics in human biology.

The publications were organized into 8 topic areas:


The slides for Dr. Altman's presentation (as a PDF) have been posted to his blog:
http://rbaltman.wordpress.com/2014/04/09/materials-from-amia-tbi-2014-year-in-review/
Posted by Ryan Whaley, Technical Lead at 10:43 AM

Email ThisBlogThis!Share to TwitterShare to FacebookShare to Pinterest
Labels: conference

On Monday 7th April, in a talk and poster presentation they will outline the PharmGKB curation process: how we curate PGx literature and interpret this for the clinic in the form of our Clinical Annotations.