PharmVar will be taking over the allele designations for the cytochrome P450 genes from the Human Cytochrome P450 (CYP) Allele Nomenclature Database, and later expanding to become a central repository for other pharmacogenes as well.  PharmGKB will partner with PharmVar to make sure PharmGKB has the most up-to-date pharmacogene allele information available in PharmVar. 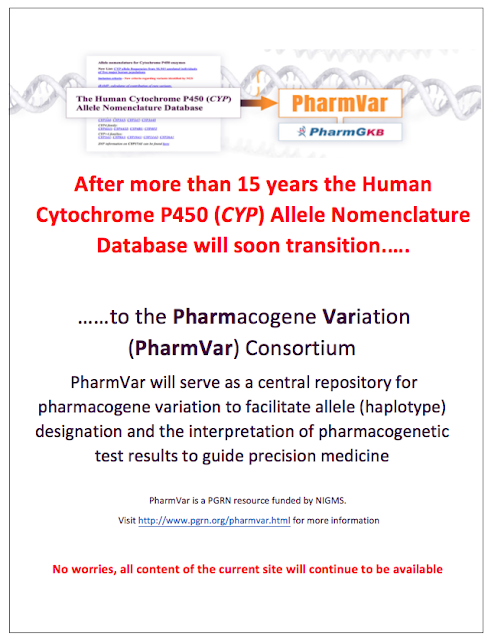 Posted by Michelle Whirl-Carrillo, Director at 10:26 AM No comments:

On August 7th, NBC News aired a segment on how pharmacogenomics can help treat patients with depression. It highlighted the story of Sarah Ellis from Sioux Falls, SD who had trouble finding a combination of antidepressant and anti-anxiety medications that did not induce debilitating adverse effects. She had tried 23 different combinations of antidepressants over the course of several years until her psychiatrist intuited that pharmacogenetic (PGx) testing might help her. When her test results showed that she did carry genetic variants that affected her response to specific classes of medications, her psychiatrist prescribed an alternative class of medications and altered her dose - thereby personalizing her medications to her genetics. According to Sarah Ellis: “My energy's been really great," she says. "I feel like I can accomplish what I want to accomplish. This was definitely worth it.”

PharmGKB has been annotating these gene-drug associations since it began in 2000. Using PharmGKB, one can find drug labels annotated with pharmacogenetic information (and genetic testing recommendations if available), pathway summaries and diagrams, and clinically relevant pharmacogenetic summaries for many drugs including those used to treat depression and anxiety. PharmGKB has also contributed to research with the International SSRI Pharmacogenomics Consortium. In addition, it has contributed to the clinical implementation of PGx through the Clinical Pharmacogenetics Implementation Consortium (CPIC), which has published two guidelines (and one update) for PGx-based prescribing and dosing of two commonly prescribed classes of drugs used to treat anxiety and depression: tricyclic antidepressants (TCA) and SSRIs.
Posted by Anonymous at 5:27 AM No comments:

Ubiquitous Pharmacogenetics (U-PGx) is a pharmacogenetics implementation project across multiple sites, in countries across Europe. Physicians at U-PGx implementation sites were surveyed online about their “knowledge and attitude towards (pharmacogenetics) PGx”,  and the results were published this month in the European Journal of Clinical Pharmacology. The majority of respondents agreed that PGx was important in their current work, although most also responded that they had not ordered a PGx test. Of those that had not, 40% responded that it was not applicable, and 40% did “not have enough knowledge about PGx testing” but of those that had, 91.7% responded that the results were useful. Despite this, a large majority of participants could not correctly interpret a pharmacogenetics test, and favored educational opportunities to improve their understanding of PGx and PGx implementation.

The article is available here.

A new study in Nature Genetics, which was also the subject of an article in The New York Times, investigates how genetic drift has played a role in establishing recessive, disease-causing mutations within South Asia where approximately ~5000 distinct communities have been identified. The authors devised an algorithm to identify large chromosomal segments that were shared between individual members of a community due to shared ancestry (identity by descent, or IBD) and identified a high prevalence of recessive, disease-causing alleles that were due to founder events among 81 off 263 unique groups. This was verified when allele-frequency differentiation was assessed in 89 unique groups. As a result, even when consanguineous marriage is not practiced, individuals from the same group had a very high probability of being carriers of the same recessive disease causing mutation. One example cited in the study is that of butyrlcholinesterase deficiency among the Vysya community in India. In that case, the muscle relaxants succinylcholine and mivacurium are contraindicated due to the risk of apnea and death. The authors hope that these findings will help to map disease-associated genes similar to what has been done in the Old Order Amish, and that future carrier screening in affected communities may decrease the incidence of recessive Mendelian diseases.

The study is available here.

More information about butyrylcholinesterase deficiency and succinylcholine is available at PharmGKB.
Posted by Anonymous at 1:10 AM No comments: